The view of the truck driver

Lately, Brazil truck drivers set off a strike movement which was caused by increased oil prices. Frequent rising oil prices are driving up operating costs. Drivers are overburdened and decide to stop the truck to uprise. Unfortunate experience is always amazing similarity, happy life is different, but I always do not know all of it! It is not poverty that has constrained my imagination and blinded my eyes. Brazil drivers feel bad about going on strike.

The ordinary truck driver in reality "snap their finger", the whole Brazil is in a mess: no oil in gas station, supermarket no vegetables, airport cancel the flight , school stop... The strike of truck drivers not only easily strangled Brazil's throat, but eventually forced the government to make concessions and downgrade oil prices, which was inextricably linked to the important role played by Brazil truck drivers in the society. Brazil is located in South America, ranking the fifth largest in the world, but the transportation in such big countries is not very developed. By 2016, the Brazil railway network was only 29165 kilometers, and 90% of the goods needed to be transported by highway (about 1 million 700 thousand kilometers), including food and gasoline. So the truck driver, like the blood of the huge body of Brazil, helps to transport the nutrients needed for all kinds of bodies, and when they are paralyzed, Brazil stops running. Perhaps it is well aware of the spirit, Brazil truck drivers have done more than this time like this year's strike, and have been trying hard. In 2015 alone, Brazil truck drivers went on strike 3 times, demanding lower oil prices and higher freight rates, and of course, very satisfactory results were achieved.

The average annual income of truck drivers in Brazil is 93105 dollars, which is higher than the national average wage of 19%. They work very hard because of 90% of the freight they need afford.They often need to drive through long time fatigue, to meet the cargo owner's delivery time limit, which is also in the same situation as the domestic truck driver. 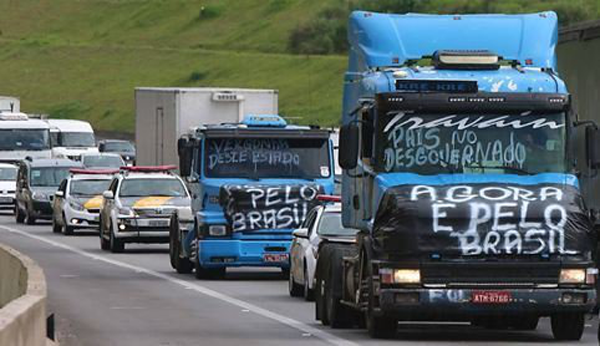 According to statistics, Brazil truck drivers usually work more than 18 hours one day, 32% people sleep less than 4 hours, 91% of the people have a bad habit of drinking and driving, 66% people rely on taking amphetamines like stimulants, to temporarily relieve driving fatigue! That's why Brazil ranks sixth in the ranking of freeway risk, second only to Yemen, Libya, Syria, Afghanistan and southern Sultan. You know, the first few are the Middle East countries that often fight. It's terrible to think about it carefully.